Grand Rapids, Mich. — Michigan Attorney General Bill Schuette discussed energy, the 2016 U.S. presidential election and the Flint water crisis in an address to members of the Michigan Oil And Gas Association at the group’s Sept. 15 meeting at the Amway Grand Plaza in Grand Rapids, Mich.

Addressing a topic that has been on the minds of many oil and gas producers in Michigan, Schuette stated that any decision regarding whether or not to shut down the Enbridge Line 5 pipeline should be based on science and thoughtfulness.

“There are two commissions looking at this, one is studying the financial risk involved, because when the lease was signed in 1953 the bond that the lessor had to put forth was a million dollars. That’s not current in terms of today’s market. The second is studying options and alternatives to Line 5,” said Schuette.

“It’s really about how you balance the environmental stewardship and protection of the Great Lakes and to make sure that our energy industry is robust and strong. I understand your concern and sensitivities to it. We’ll go through it in a thorough and thoughtful fashion and make sure that people in the Upper Peninsula have propane to heat their homes and that the ‘on-ramp’ in Lewiston is still something that’s functioning and productive for all…that’s a rational approach, it’s a truthful approach, and I think that is what is being demanded by reasonable people, not by the extremes on one side or the other,” said Schuette.

Schuette said that as a conservative, an economic conservative, and as someone that has a philosophical alignment to economic development, he’s proud to be working on the issue with members of the oil and natural gas industry and to be a part of making Michigan strong in the future.

Schuette detailed his history of working with industry, advocating for fifth amendment rights on the Nordhouse Dunes case in 1980s and 1990s, as well as suing the EPA over the Clean Power Act in 2014. In August 2016 Schuette joined a multistate lawsuit seeking to block a new Obama administration rule limited methane ­emissions at oil and natural gas sites.

“I believe in strong environmental stewardship and strong economic development. That’s why I’m for the Nexus pipeline [a proposed gas transmission system that would move supplies of Appalachian shale gas to high-demand markets in the U.S. Midwest] in Michigan and the Keystone Pipeline in the U.S. That’s the philosophical suit I put on as your Attorney General,” said Schuette.

Schuette also discussed benefits of oil exploration and developments. “Because of technology and fracking, we now in America are going to experience new opportunities in oil and gas… . We are an exporter of oil and gas instead of an importer. We have reserves we are using to drive America economically. Instead of sending money overseas and putting money in their pockets we can contribute to our own economic stability in America,” said Schuette.

Schuette also discussed the 2016 U.S. Presidential Election, emphasizing the importance of electing a leader that can be trusted and one that has different policies than the Obama administration. “We have two choices, Hillary Clinton or Donald Trump. And I’m not going to turn the keys and the engine of America over to Hillary Clinton, because I don’t trust Hillary Clinton,” said Schuette.

According to Schuette, many mainstream media and liberal media groups have reported the election is basically over, and that Clinton will win, “What [the media doesn’t] see is that a whole bunch of Americans out there were called ‘deplorables’ by Clinton—that in itself is deplorable. You know what else is deplorable, that right now America has the lowest rate of building jobs since 1939. What is deplorable is that we’ve now lost the respect of our allies across the world where our allies don’t trust us and our adversaries don’t fear us. That’s deplorable.”

Schuette also discussed the Flint Water Crisis and his job as chief law enforcement officer in the State of Michigan. “I am a lawyer for the citizens of Michigan, and when the law is broken, there are consequences. I don’t care who you are. The issue in Flint is about accountability. Some people question and wonder, ‘Do things work in America? Do things work in Michigan? Is there a double standard? Are there two systems of justice? The answer is: there’s one. It doesn’t matter who you are, a big shot or no shot at all. If you violate the law, there are consequences. My job in Flint is accountability and to bring justice to the families of Flint,” said Schuette.

Schuette also commented on the notion that due to the Flint water crisis, state regulators are now either afraid to make decisions or make decisions that go above and beyond what the regulations state.

“To not do your job correctly and use Flint as an excuse is wrong. That’s just not right. The only people that should be afraid or worried about doing their job are those that have done something wrong,” stated Schuette. “If you have not done something wrong you should not have to worry about your job and should be able to do it with thoroughness and expertise. That’s what service is all about. If you, as a regulator say, ‘we can’t do this because of Flint’, well that’s a cop-out and it’s just not right,” said Schuette.

Following his address to membership, Schuette was presented with the ­traditional drop of Michigan crude oil by MOGA Chairman Jeff Cook. 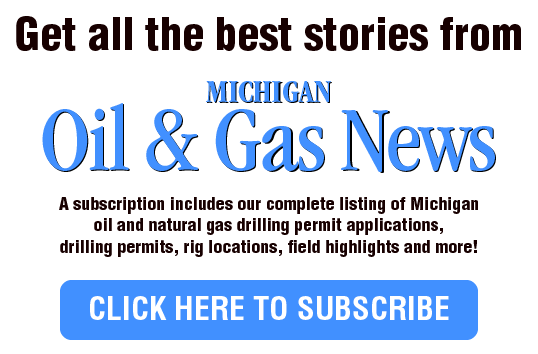