B & B Oilfield Equipment Corp. expands services and reach 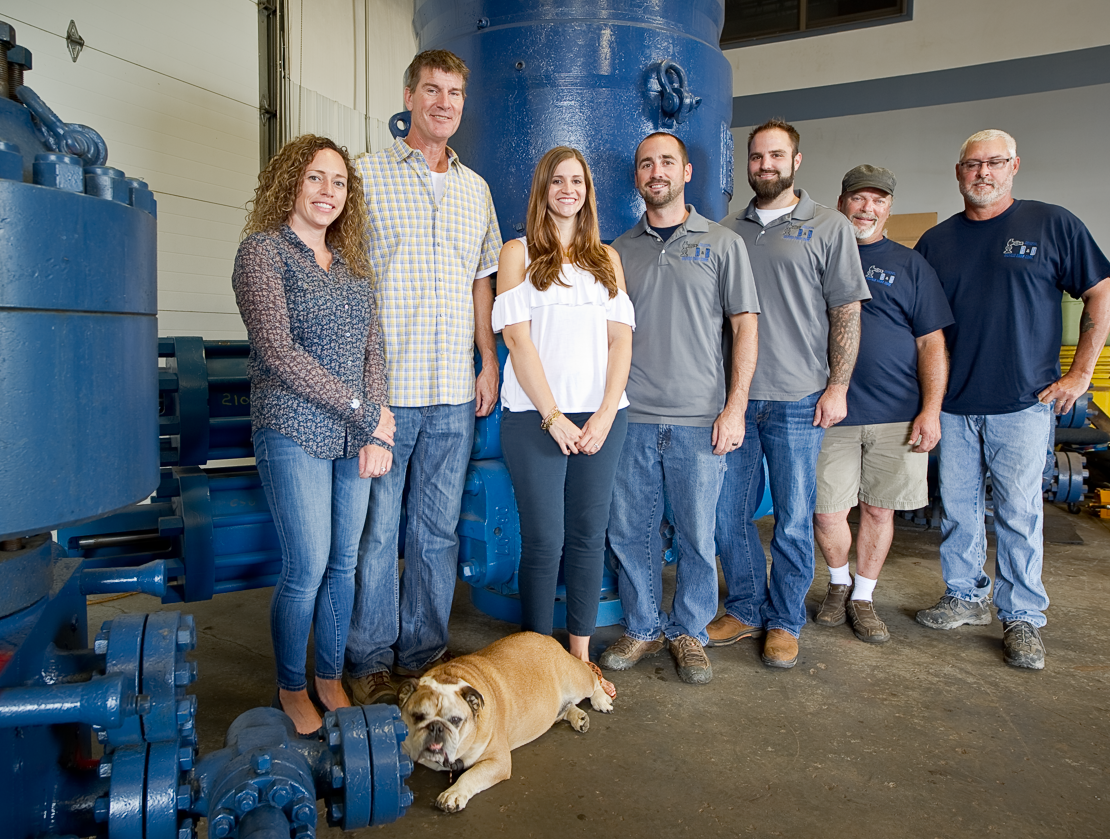 MT. PLEASANT, Mich. — What began 35 years ago as a small, family-owned and operated wellhead business in Mt. Pleasant, Mich. has thrived in the ensuing decades, expanding in both products and services offered while extending its reach outside Michigan — all while remaining a family business, run by the same, albeit larger, family.

B & B Oilfield Equipment Corp. was established in 1982 in Mt. Pleasant, Mich. by former Cameron Iron Works employee W.M. “Harold” Banks, who remains its C.E.O. today.

After breaking out in the oil field as a roughneck, Harold Banks worked in both Oklahoma and Illinois before moving his family to Michigan in the early 1970s and working for Cameron in its Mt. Pleasant store. When he made the decision to go into business for himself, he did it with three members of his family by his side — his late wife Marjorie, son Hal and daughter Billie Lea.

B & B Oilfield Equipment was primarily a wellhead company in the beginning, and continued to be operated by Harold, Marjorie, Hal and Billie Lea until 1989, according to Hal Banks, who took over running the company in 1998 and later purchased the company from his father in 2010.

“Wellheads were our core product at first,” said Hal Banks, currently the company’s president, “we have since expanded into rental equipment and do our own trucking as well.”

The company’s expansion took place about the time that it first established a presence in Pennsylvania, in about 1999, Hal said. “Everything changed” at that time, Hal noted. New product and service offerings for the company included: sales and rentals of blowout preventers, nipple-up and testing crews, flowback services, two- and three-phase separators, and frac stack and mud pump rentals.

B & B Oilfield Equipment’s entry into the Pennsylvania market was in response to Trenton-Black River activity there. “Nobody had any 10,000-pound blowout preventers at the time. We actually took our equipment out there for rental jobs and I rented a building and just left them there, because that’s where the market was at that time — for 10,000-pound rental equipment,” Hal noted.

Hal said he had no idea at the time they began working in Pennsylvania in 1999 what was to come, with neither the Marcellus Shale boom that would be followed by the more recent Utica Shale development off the ground at the time. “We were in good shape to service Marcellus and Utica activity and now we have 15,000-pound rental equipment.” At one time, B & B Oilfield Equipment worked out of two locations in Pennsylvania, but currently runs all of its work in that region from a store in New Alexandria, near Pittsburgh.

The Banks family’s heritage in the oil and gas industry dates back prior to his father Harold’s involvement, Hal noted this week, with his grandfather having worked in the oilfields as a pumper. “That means that my daughter, Devan, is the fourth generation of the family to be involved,” he said.

Having family members join the business was not a foregone conclusion, it just happened, Hal noted. “It’s just something that, either you are interested in it, or you’re not. Not everyone is made out for the oilfield,” he added.

While B & B Oilfield Equipment Corp. supports several members of the Banks family, it also provides a livelihood to a number of other full-time employees in the central Michigan area and in Pennsylvania, with a payroll of a million dollars a year, more when the company is busy, Hal said.

The company currently has 17 employees, about half the number it had at its peak. “It’s always hard to let people go,” Hal Banks said. “We had some people quit and we had to lay some people off. But being a family business, they become your family too. It’s just how it is.”

Having been in the oil industry for more than three decades, Hal Banks is no stranger to the up and down nature of the business. “We are in a reactive business,” he said. “It’s hard to be proactive. You try to keep your debt load low, because you know it will slow down. That’s how we have made it, by keeping the debt load low.”

Hal and Erin Banks agreed that a primary difference between working with customers in Michigan and those in Pennsylvania, Ohio and West Virginia is that the company has more established long-term relationships with its Michigan customer base. “We definitely have more loyal customers here,” Erin said.

The nature of the company’s work in Michigan and Pennsylvania has changed over time, Hal said. B & B Oilfield Equipment sells very few wellheads in Pennsylvania currently, doing nipple-up and testing and rentals and hardly any flowback work. In Michigan, it’s all wellhead and flowback work. “We offer different things, but it goes back to accepting what the market will give you,” Hal said. “You move the artillery around.”

At one time, Harold thought Hal should move to Pittsburgh. “That’s where he thought I should be, that’s where the growth was and the drilling,” Hal said. Drilling activity is down in Michigan of late, with a handful of rigs running, Hal noted. “I think we’re chasing around 50 to 60 rigs in the Pennsylvania, Ohio and West Virginia area right now. In Michigan, we’ve gotten away from the drilling rigs and concentrate more on existing wells, like gas storage wells,” Hal said.

Hal said the reverse was true when the company started out, with close to 60 rigs running in Michigan and only 5 to 10 in Pennsylvania. “I think most of the people from Michigan went to work out of state because they had to, not because they wanted to,” Hal added. He said B & B has been contacted about going to North Dakota to work, but thus far has chosen not to. “That’s too far. I don’t want to rent anything to anybody that I can’t jump in a car and go fix myself within 8 or 10 hours,” Hal said.

B & B Oilfield Equipment Corp. is a registered importer-exporter in Canada and does do quite a bit of work there, Hal said. “We keep one or two jobs going in Canada most of the time,” he said.

An avid sportsman, Hal Banks enjoys boating, fishing and hunting, much of it while staying at the home he and his wife Erin have on Drummond Island and on neighboring Cockburn Island in the Canadian waters of northern Lake Huron, where the couple also owns property. “We love it here in Michigan,” Hal noted this week. “We’ll probably never leave here. There’s a reason we live here…,” he said, with Erin finishing his thought by saying, “It’s called Lake Huron.”

With his strong personal connection to the Great Lakes waters surrounding his home state of Michigan, Hal is frustrated by meeting people who, upon learning he works in the oil and gas industry, immediately want to talk about fracking. “I tell them, nobody wants to contaminate our water here. If that’s what was going on, I wouldn’t do it. People just need to be educated,” he added.

Hal pointed to the use of lease bonus monies and oil and gas production royalties generated on state of Michigan-owned minerals to fund both the Michigan Natural Resources Trust Fund and, more recently, the State Parks Endowment Fund as a “great thing,” something that people involved in the oil and gas industry in Michigan can be very proud of.

“We choose to live in Michigan, that’s just it,” Hal said. “We could live anywhere we wanted to, but then again, you’ve got people depending on you. I’ve got my own children, my sons-in-law, and now they have children of their own. You can’t just shut it down with all of that going on.”

B & B Oilfield Equipment Corp. may be contacted at its Mt. Pleasant, Mich. headquarters by telephone at 989-773-6403. Their website is located at http://bboilfieldeq.com.